The estimated of soil losses by erosion in semi-arid regions is often difficult due to the complex interaction of many factors such as climate, geology, land use, topography and human activities. RUSLE, Gravilovic and ICONA models are used to evaluate soil losses and characterize degraded areas in the K’sob watershed (1,482 km2), located north eastern Algeria, in order to implement management intervention. The results show that 90 % of the basin surface is subject to low to moderate risk erosion and only 10 % is vulnerable to erosion with sediment loss estimated at 4.6 t ha−1 year−1. Areas with excessive risk of gully and sheet erosion cover respectively 10 and 1 % of the basin and zones suffering the combined effects of these two processes would total more than 3 % of the basin. Finally, the sites subject to potential landslide cover just over 0.3 km2. The K’sob dam’s reservoir is surrounded by potentially sides degraded by sheet erosion and gully. However, larger areas degraded by these processes are located near urban areas as Rabta, Bordj Ghdir and K’sour. Spatial differences in erosion rates in the K’sob watershed are mainly caused by differences in the type of land cover and slope gradient. RUSLE, Gravilovic and ICONA models provide a useful tool for identifying soil erosion and can be successfully used for prioritization of vulnerable areas in semi-arid watersheds. 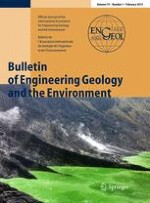 Deformation characteristics and failure mode of the Zhujiadian landslide in the Three Gorges Reservoir, China