In arid and semi-arid environments, the amount of recharge received by aquifers is far more critical to the sustainable use of water than it is in humid regions. Groundwater recharge (GWR) is critical to maintain the abundance of groundwater. In the present study, suitable areas for GWR in Jazan region have been identified by using a GIS-based decision support system (DSS). The DSS was implemented to obtain suitability maps and to evaluate the existing GWR in the study area. The DSS inputs comprised maps of rainfall surplus, slope, potential runoff coefficient, land cover/use and soil texture. The spatial extents of GWR suitability areas were identified by a hierarchical process analysis that considered five layers. The model generated a GWR map with four categories of suitability: excellent, good, moderate and poor and unsuitable. The spatial distribution of these categories showed that 50.5 and 31 % of the study area was classified as excellent and good for GWR, respectively, while 16 and 2.5 % of the area were classified as moderate and poor and unsuitable, respectively. Most of the areas with excellent to good suitability have slopes of between 4 and 8 % and are intensively cultivated areas. The major soil type in the excellent to good areas is loamy sand, followed by silt loam, and the rainfall in these areas ranges from 100 to 270 mm. The locations of existing GWR dams were compared with the locations indicated on the generated suitability map using the proximity analysis tool in ArcGIS 10.1. Most (75 %) of the existing GWR structures that were categorised as successful were within the excellent and good areas, followed by moderately suitable (25 %). 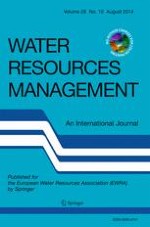 A Holistic System Approach to Understanding Underground Water Dynamics in the Loess Tableland: A Case Study of the Dongzhi Loess Tableland in Northwest China