The online version of this article (doi:10.​1007/​s11109-017-9420-x) contains supplementary material, which is available to authorized users.
For comments, I thank Eric Groenendyk, Shannon Jenkins, Eric Lindgren, Chris Warshaw, Amber Wichowsky, and participants at the 2016 and 2017 Midwest Political Science Association Meetings and the 2017 State Politics and Policy Conference. For technical assistance and suggestions, I thank Cindy Kam and Fred Batista. I also thank Kyle Dobbins for research assistance. Support for this research was provided by the Center for the Study of Democratic Institutions at Vanderbilt University and by the University of Memphis. The survey studies reported herein were approved by the Institutional Review Board at Vanderbilt University and the Institutional Review Board at the University of Memphis. Replication files for this paper are available in the Political Behavior Dataverse (https://​dataverse.​harvard.​edu/​dataverse/​polbehavior).

City elections in the U.S. are widely thought to be low-information contests decided by non-ideological factors. This consensus casts doubt on the possibility of electoral accountability in cities, and renders recent evidence of municipal responsiveness puzzling. However, our knowledge of how voters actually behave in local elections is severely limited by a lack of individual-level survey data collected from local contests. Using three such original surveys, I re-examine the role of ideology in mayoral elections, recruiting samples of local voters via geotargeted Facebook advertisements. In two large cities, I find ideology is a powerful and independent predictor of vote choice. Using a panel design, I find voters learn the relative ideological positions of candidates over the course of a campaign, and that learning causally impacts vote choice. The effect of ideology also replicates in a conjoint experiment fielded to a sample of small-city voters in another region. Electoral accountability is thus a plausible explanation for ideological responsiveness in U.S. cities, and the methodological tools introduced here can now be applied to a variety of questions about local voter behavior. 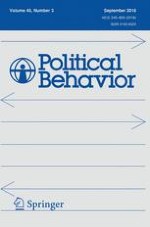 From Respondents to Networks: Bridging Between Individuals, Discussants, and the Network in the Study of Political Discussion

What Draws Politicians’ Attention? An Experimental Study of Issue Framing and its Effect on Individual Political Elites

Feelings of Political Efficacy in the Fifty States

The Exaggerated Life of Death Panels? The Limited but Real Influence of Elite Rhetoric in the 2009–2010 Health Care Debate