An in situ characterization methodology based on the magnetic resonance imaging (MRI) and Raman imaging is applied to investigate the effect of citric acid in the impregnation step of molybdenum catalysts promoted with cobalt in the presence of phosphorus and supported on γ-alumina. MRI provides temporal and spatial information of the transport of species of the impregnation solutions within the porosity with a spatial resolution of 39 × 39 µm. Raman imaging gives information about the chemical nature of the species deposited on the support with a spatial resolution of 16.2 × 16.2 µm. The effect of citric acid strongly depends on the ratio between the additive and molybdenum used in the impregnation solution. For a ratio of 0.2, at the end of impregnation, molybdenum ions are in an egg-yolk distribution either in polymeric or monomeric form. For a ratio of 0.7, cobalt ions can be either in the form of aqua complexes in an egg-yolk distribution or in the form of H2PMo11CoO405− heteropolyanion, which can improve the proximity between molybdenum and cobalt ions. This work gives new insights concerning the role of citric acid on the metal distribution profiles obtained at the end of impregnation, which can be used to control the final active phase distribution. 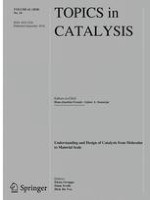 Understanding and Design Catalysts from Molecular to Material Scale: One of the Five Grand-Challenges for Catalysis at the 13th European Congress on Catalysis

The Effect of Al-Alkyls on the Phillips Catalyst for Ethylene Polymerization: The Case of Diethylaluminum Ethoxide (DEALE)