Quantity discrimination abilities are seen in a diverse range of species with similarities in performance patterns, suggesting common underlying cognitive mechanisms. However, methodological factors that impact performance make it difficult to draw broad phylogenetic comparisons of numerical cognition across studies. For example, some Old World monkeys selected a higher quantity stimulus more frequently when choosing between inedible (pebbles) than edible (food) stimuli. In Experiment 1 we presented brown capuchin (Cebus [Sapajus] paella) and squirrel monkeys (Saimiri sciureus) with the same two-choice quantity discrimination task in three different stimulus conditions: edible, inedible, and edible replaced (in which choice stimuli were food items that stood in for the same quantity of food items that were given as a reward). Unlike Old World monkeys, capuchins selected the higher quantity stimulus more in the edible condition and squirrel monkeys showed generally poor performance across all stimulus types. Performance patterns suggested that differences in subjective reward value might motivate differences in choice behavior between and within species. In Experiment 2 we manipulated the subjective reinforcement value of the reward by varying reward type and delay to reinforcement and found that delay to reinforcement had no impact on choice behavior, while increasing the value of the reward significantly improved performance by both species. The results of this study indicate that species presented with identical tasks may respond differently to methodological factors such as stimulus and reward types, resulting in significant differences in choice behavior that may lead to spurious suggestions of species differences in cognitive abilities. 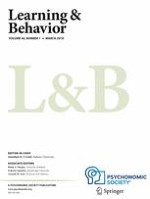 Transfer of discriminative control during stimulus fading conducted without reinforcement

Apes track false beliefs but might not understand them