The ongoing degradation of freshwater habitat quality and subsequent losses of biodiversity is alarming. One key to successful freshwater management is to understand how different scale-dependent diversity components (i.e. γ-, α- and β-diversity) change along present-day anthropogenic impact gradients. We used macrophyte, fish and macroinvertebrate data from Danish lowland streams to investigate whether (1) high connectivity in reaches situated in lower parts of the stream network (downstream sites) generates high α-diversity, while dispersal limitation and high habitat heterogeneity across the more isolated upper reaches (headwater sites) generate high β-diversity, (2) γ-, α- and β- diversity decrease with increasing hydromorphological impact and (3) high connectivity in downstream reaches buffers against impacts on biodiversity. Results showed that α-diversity was higher in downstream sites, while headwaters did not exhibit greater β-diversity. We observed a significant but relatively small decline in α-diversity with increasing hydromorphological impact, while β-diversity changed more unpredictably along the gradient. There was no clear mitigating effect in downstream reaches as the reduction in diversity from low to high impacted sites was similar between upper and lower reaches. We suggest that the results, which generally contradicted our predictions, partly reflect the intense historic and present land use in the region leading to an isolation of available source communities and a diminished regional species pool. The importance of having a landscape perspective in conservation management in highly impacted regions is emphasised because it is a prerequisite for recolonisation and population stability over time. 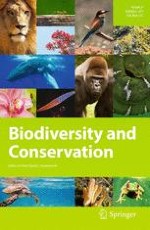 To track or to call: comparing methods for estimating population abundance of African lions Panthera leo in Kafue National Park

Books on biodiversity and conservation