The dielectric properties of La1.9Sr0.1Ni0.6Mg0.4O4/poly(vinylidene fluoride) (LSNMO/PVDF) composites were investigated. A giant-permittivity LSNMO ceramic was used as a filler to enhance the dielectric permittivity (ε′) of a PVDF polymer. LSNMO particles were well dispersed in the PVDF matrix. ε′ and the loss tangent (tanδ) of the composites increased with increasing LSNMO volume fraction. Interestingly, a greatly enhanced ε′ ≈ 103 was obtained in the LSNMO/PVDF composite with 50 vol% LSNMO, which was ≈100 times higher than that of pure PVDF. The percolation theory, effective medium theory, and effective medium percolation theory (EMPT) models were employed to describe the dielectric behavior of the LSNMO/PVDF composites. The calculated values obtained by the EMPT model were in close agreement with the experimental values. The large increases in ε′ was described as a combination of strong interfacial polarization due to a short inter-particle distance between LSNMO particles and a high ε′ of LSNMO ceramic filler. 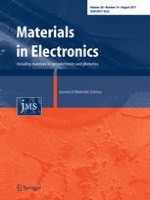