A detailed study on the effect of cold rolling and annealing temperature on the texture and drawability of Ti-stabilized interstitial-free (IF) steels have been made with a view to achieving high drawability. The presence of shear type and cold-deformation type of textures in the hot bands of 3.8-, 4.3- and 4.5-mm thickness has been attributed to finish rolling below the Ar 3 temperature. The 4.5-mm hot band was selected for further studies as it showed a strong γ fiber. Cold rolling of the hot band was done in the range of 60 to 90 pct, followed by batch annealing in the range of 660 °C to 750 °C. For a particular annealing temperature, a maximum in the intensity of \( {\left\{ {{\text{111}}} \right\}}{\left\langle {{\text{110}}} \right\rangle } \) component, and in average normal anisotropy, an r m value was observed with the increase in cold reduction, followed by a drop with further cold reduction. The results are discussed in terms of orientation distribution function (ODF), recrystallization behavior, and precipitation of FeTiP, (Ti, Mn) S, and TiC particles. Fine FeTiP-type precipitates in the grains and at the grain boundaries in samples annealed at 660 °C, as well as samples associated with (Ti, Mn)S in samples annealed at 750 °C, were found to be detrimental for the development of beneficial γ fiber and improved drawability, while coarse FeTiP-type precipitates in 80 pct cold-reduced samples annealed at 680 °C and 710 °C resulted in maximum r m values of 2.29 and 2.25, respectively. The dissolution of TiC at an annealing temperature of 750 °C adversely affected drawability due to the solute drag effect of solute carbon. An optimized combination of cold reduction and annealing temperature has been established for achieving a uniform γ fiber along with high r m values. 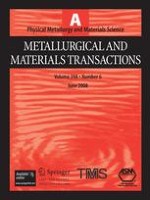 A New Tensile Test for Aluminum Alloys in the Mushy State: Experimental Method and Numerical Modeling