Industrial experiments were performed to improve the cleanliness of 95CrMo drill rod steel by slag refining. Higher steel cleanliness, lower corrosion, and small inclusions were obtained using the optimal slag composition (pctCaO/pctSiO2 = 3.7 to 4, pctCaO/pctAl2O3 = 6 to 8). Layered composite inclusions formed during vacuum decarburizing refining. CaS first precipitated around the spinel and subsequently formed inclusions in which solid CaS-CaO wrapped around the Al2O3-MgO-SiO2-CaO system as the modification and diffusion progressed. The thermodynamic equilibrium between slag and liquid 95CrMo steel at 1873 K (1600 °C) was also studied to understand the effect of slag composition on the oxygen content and absorption capacity for Al2O3. A mathematical model based on an investigation of slag viscosity and the interfacial tension between slag and inclusions was used to predict the size of critical inclusions for different slags. The evolution of typical inclusions is discussed in terms of the study of reactions between slag and steel. 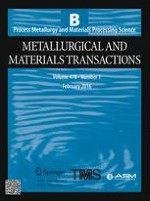 Characterization of Evaporating Species from B2O3, B6O, and Their Mixtures by Knudsen Cell Mass Spectrometry