» Jetzt Zugang zum Volltext erhalten
Wichtige Hinweise
An extended abstract of this work [8] has appeared in the 11th Conference on Web and Internet Economics (WINE 2016). Research was supported by the project Algorithmic Game Theory, co-financed by the European Union (European Social Fund) and Greek national funds, through the Operational Program “Education and Lifelong Learning” of the National Strategic Reference Framework -Research Funding Program: THALES, investing in knowledge society through the European Social Fund, and by grant NSF CCF 1216103. The majority of this work was done while the second author was at the Department of Informatics and Telecommunications of the University of Athens.

We investigate how and to which extent one can exploit risk-aversion and modify the perceived cost of the players in selfish routing so that the Price of Anarchy (PoA) wrt. the total latency is improved. The starting point is to introduce some small random perturbations to the edge latencies so that the expected latency does not change, but the perceived cost of the players increases, due to risk-aversion. We adopt the simple model of γ-modifiable routing games, a variant of selfish routing games with restricted tolls. We prove that computing the best γ-enforceable flow is NP-hard for parallel-link networks with affine latencies and two classes of heterogeneous risk-averse players. On the positive side, we show that for parallel-link networks with heterogeneous players and for series-parallel networks with homogeneous players, there exists a nicely structured γ-enforceable flow whose PoA improves fast as γ increases. We show that the complexity of computing such a γ-enforceable flow is determined by the complexity of computing a Nash flow for the original game. Moreover, we prove that the PoA of this flow is best possible in the worst-case, in the sense that there are instances where (i) the best γ-enforceable flow has the same PoA, and (ii) considering more flexible modifications does not lead to any improvement on the PoA. 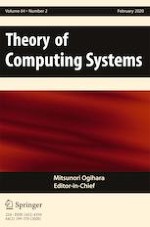 Cache Me if You Can: Capacitated Selfish Replication Games in Networks