In Situ Investigation of the Deactivation Mechanism in Ni-ZSM5 During Ethylene Oligomerization | springerprofessional.de Skip to main content
TOOLBAR 1 2 3 4
SUCHE MENÜ 1 2 3 4

Ethylene oligomerization reaction on Ni-modified and unmodified ZSM-5 catalysts was studied at ambient pressure as a function of temperature by in situ FT-IR spectroscopy and mass spectrometry, focusing the attention on the formation of adsorbed species, which are likely to be responsible for the catalysts deactivation. The two catalysts show similar catalytic performance and selectivity, but different stability with time-on-stream, particularly in the 300–400 °C range. On both catalysts alkylated compounds and unsaturated carbocations were observed as stable adsorbed species up to 300 °C. The deactivation of the Ni-ZSM5 catalyst was related to the formation of a complex mixture of methylated polycondensed aromatic compounds (coke/coke precursors), which are not desorbed even by increasing the temperature up to 400 °C. In contrast, at 400 °C ethylene oligomerization on H-ZSM5 sample proceeds without deactivation due to the higher desorption rate of the surface species, which are mainly unsaturated carbocations with small amounts of methylated poly-condensed aromatics. 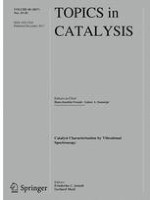 The Role of NO2 in the Fast NH3-SCR of NOx: A Combined In Situ FTIR and EPR Spectroscopic Study