Liquid cell AFM has been applied to study in situ the formation and properties of self-assembled films formed on mica surfaces by octadecylamine from alkane solution. Mica surfaces immersed in hexadecane or dodecane at room temperature show no identifiable surface films. However, when octadecylamine solution is injected into the cell, a boundary film forms almost immediately. This film takes the form of irregular islands of mean diameter approximately 1–3 µm and thickness typically 1.5 nm when measured in contact mode. These islands are believed to correspond to patches of vertically oriented but tilted octadecylamine or ammonium salt held together primarily by van der Waals forces between adjacent alkyl chains. These films are quite labile in that during scanning of the tip in both tapping mode and contact mode changes to the shape of the islands take place, including consolidation of the island density in the scanned region and depletion from around this area. In situ experiments in which the temperature of the cell is varied over time show that the initially formed islands disappear at a temperature of ca. 35 °C but are reformed when the cell is re-cooled. Similar tests on samples that remain immersed in solution for extended periods show more stable films, with islands being lost only above about 50–60 °C. The work shows that liquid cell AFM has great promise for studying the formation and properties of the boundary films formed by organic friction modifiers. 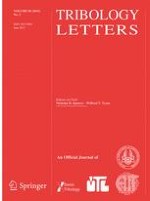 Wear Behavior of Polyaryletherketones Under Multi-directional Sliding and Fretting Conditions