It’s a huge sacrifice. I know I can die if we are exposed, but we are also going to die if we don’t have basic needs. We need the stability of an earned income no matter what. We should not be invisible, but we are all humans, too. We have families and we should be able to have sick leave, so that we can stay home and take care of them. We should not have to choose between working and living. I want Congress to include us, to give us help, too. A crisis is not the time we should say, you need to have documents to have the basic necessities. We should not be excluded from everything. The system is so broken and does not include people like us, even when we are called essential. (ibid.)

History teaches us that capitalism is hard to overcome, and although it becomes more obvious every day that it needs to be overcome or at least extensively transformed if global human civilisation is to survive into the next century, we urgently need to take steps in the right direction within the system. One very simple measure would be to resume collecting significant taxes from the rich and from companies, as was done in the decade after World War II, and to use this tax revenue to make all essential work financially attractive by subsidising it such that all these jobs are put on a par with current upper middle-class incomes. The gentrification of inner cities should be rolled back politically. The fact that metropolitan workers spend hours every day commuting to and from their homes, which in any case are still far too expensive, only to sell bagels and coffee to knowledge workers, capital owners and the non-working rich, to clean the toilets they use or to care for their children, is an absurdity that must end—and not only because it is very costly in ecological terms.
There should also be massive resistance to any attempts to get ‘back to normal’ in agriculture after countries like Australia and Germany temporarily suspended their racist job market regulations for seasonal workers and refugees (who are not usually allowed to work legally in Germany) during the crisis. Scandals sparked by the highly exploitative and unhealthy working conditions faced by migrant workers in the meat industry and other low-income sectors should prompt swift action to address this deplorable state of affairs.
Of course, much of this sounds highly unrealistic given how little organised solidarity the middle classes have displayed—at least in more recent times—towards the lower and working classes; however, in light of what has happened since the 2007/2008 financial crisis, it is not doom-mongering to predict that pressure from the fundamentalist right and those of an openly fascist persuasion will see stable liberal democracies become few and far between if the costs of the crisis are to be borne yet again by the middle and working classes and there is no strong progressive alliance to resist this. This in turn would massively weaken science on account of the anti-science—and indeed anti-reason—agenda of these political forces that Paul Krugman has criticised for the ‘general prevalence of zombie ideas’ in their philosophies, ‘ideas that have been proved wrong by overwhelming evidence and should be dead, but somehow keep shambling along, eating people’s brains’ ([ 7], n.p.).
What good advice could be given to researchers in this time of multiple global crises? As Petar Jandrić, a researcher in postdigital studies, 2 points out, the ‘humanities and social sciences are already making significant contributions in areas such as informing citizens, prevention of panic, big data analysis, open science, and others’ ([ 8], 236). I also agree wholeheartedly with many of his other remarks, namely, that we ‘should not take our home isolations and quarantines as unexpected vacations’ or opportunities ‘to catch up with old projects’ but instead ‘look into the strengths of our disciplinary knowledges and research methods to try and create opportunities to contribute to humanity’s collective struggle against the Covid-19 pandemic and point towards more sustainable futures’ ([ 8], 237). As Jandrić adds, some of ‘our current insights will be hasted, and will serve as mere first-hand testimonies for later (and more balanced) research’, and in the current ‘infodemic’, most will ‘probably simply remain overlooked and unread’ (ibid.); I can also relate to what he means when he writes:

Wearing my academic researcher hat, I am not ashamed of naivety of this paper—it honestly represents my current thoughts and feelings […]. These thoughts are likely to be overridden by new developments, but they will nevertheless serve as a testimony of this historical moment. Wearing my academic editor hat, I am not afraid of publishing papers that might be proven wrong or even retracted – messy and unpredictable postdigital challenges pertaining to viral modernity require messy and unpredictable attempts at answering. Wearing my Daddy hat, I am admittedly a bit ashamed of withdrawing into the world of research while my son lives through some of the most challenging times in his […] life. Yet beneath all these hats, there is a head; in this head, there is a mind; and in this mind, there is a tiny, persistent voice that whispers: knowledge and solidarity are the key to long-term survival and flourishing of the human race. I invite all postdigital scholars to take this voice seriously, get out of our comfort zones, and explore all imaginable aspects of this large social experiment that the Covid-19 pandemic has lain down in front of us. (ibid.)

Last but not least, I want to express my sincere gratitude—as regards both the April and the new August issue of NanoEthics—to Jennyca Parcon and the entire Springer team in charge of our journal for making so many high-quality publications possible in extraordinarily difficult times. Likewise, my special thanks goes to the guest editors of the April special section, Darian Meacham and Miguel Prado Casanova, to all the authors of articles and, also very importantly, to the reviewers of published articles and of papers currently under review or consideration. Let us all hope that the Covid crisis will end well and that we as humanity will be able to learn lessons from it, creating a more just, resilient and sustainable world society.
Open Access This article is licensed under a Creative Commons Attribution 4.0 International License, which permits use, sharing, adaptation, distribution and reproduction in any medium or format, as long as you give appropriate credit to the original author(s) and the source, provide a link to the Creative Commons licence, and indicate if changes were made. The images or other third party material in this article are included in the article's Creative Commons licence, unless indicated otherwise in a credit line to the material. If material is not included in the article's Creative Commons licence and your intended use is not permitted by statutory regulation or exceeds the permitted use, you will need to obtain permission directly from the copyright holder. To view a copy of this licence, visit http://​creativecommons.​org/​licenses/​by/​4.​0/​.

Springer Nature remains neutral with regard to jurisdictional claims in published maps and institutional affiliations.
Footnotes
1
For one very useful resource on the Covid-19 crisis, see https://​the-politics-of-covid-19.​com/​final-edition/​.
2
On the website of the journal edited by Jandrić ( https://​www.​springer.​com/​journal/​42438), the notion of the ‘postdigital’ is discussed as follows: ‘We are increasingly no longer in a world where digital technology and media is separate, virtual, “other” to a “natural” human and social life, and education is often at the forefront of these trends. Journals engaged with technology and education tend to view the research field as concerned with the “effects” of digital media and other technologies on the existing activities of teaching, learning in education, thus continuing to assume a clear division between an authentic educational practice and the imposition of an external, and novel, technology. However, during the past years, we are witnessing a rapid growth in number of academic books and articles dealing (explicitly and implicitly) with education and research in and for the postdigital age’. 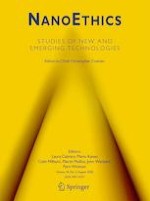 Regulating Risk of Nanomaterials for Workers through Soft Law Approach

Is COVID-19 a Message from Nature?

“I Don’t Want to Do Anything Bad.” Perspectives on Scientific Responsibility: Results from a Qualitative Interview Study with Senior Scientists

Textual Representation and Intertextuality of Graphene in Swedish Newspapers

Blueprint for the Development and Sustainability of National Nanosafety Centers