We estimated the in-use stocks of polybrominated diphenyl ethers (PBDEs) in Japan using a population balance model. The estimation is based on the domestic demand of PBDEs and the assumed survival rate of these products. Two cases relevant to the future regulation of commercial deca-BDE are considered, namely (1) deca-BDE declines at the same rate as the current rate of decline, and (2) deca-BDE is discontinued after 2020. The estimates of the decreasing rates of in-use penta-, octa-, and deca-BDE stocks were proportional with the measured decreases in the atmospheric concentrations of these substances. The in-use penta- and octa-BDE stocks could be depleted in the near future (500 and 60 tonne in 2013, and an estimated 20 and <1 tonne in 2020, respectively). Relevant to case 1, the in-use stocks of deca-BDE-containing products would be 28,000 tonne in 2013 and an estimated 1900 tonne in 2040, providing an ongoing source of deca-BDE emission to the environment. On the other hand, relevant to case 2, most of the deca-BDE would be phased out by 2040. The atmospheric emissions of deca-BDE were predicted at 84–841 kg/year in 2013 and an estimated 43–425 kg/year in 2020. 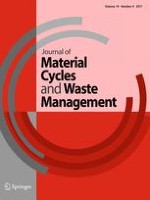