Inclusions in Al-killed steel with [S] of about 0.0060 to 0.0070 mass pct were characterized and discussed, evaluating the combined effects of basic slag refining and Ca treatment in ladle, together with reoxidation of liquid steel in casting tundish. Inclusions were changed from Al2O3 to MgO-Al2O3 spinel and then to MgO-Al2O3-CaO during basic slag refining. After Ca treatment, many (MgO-Al2O3) + CaS inclusions were formed, featuring the coexistence of MgO-Al2O3 and CaS to form a dual-phased structure. In the following Ar blowing, the number density of (MgO-Al2O3) + CaS inclusions and pure CaS increased obviously, which implied that [Ca] preferentially reacted with [S] rather than [O] in steel. Reoxidation in casting tundish caused the pickup of oxygen in steel, and the rise of total oxygen (T.O) was 0.0002 mass pct; even 55t steel has been poured. As a result, the content of CaO in inclusions increased and MgO-Al2O3-CaO inclusions were formed again. Thermodynamic calculations revealed that the driving force was strong for the formation of CaS-based inclusions. Higher carbon content in steel would help to reduce oxygen content while enhancing the activity of [S] in steel, which further stabilized the existence of CaS-based inclusions. Therefore, inclusions were mostly the solid (MgO-Al2O3) + CaS dual-phase ones, without the formation of liquid calcium aluminates. Contents of CaS and CaO in inclusions were affected by the [mass pct S]/[mass pct O] ratio, which was calculated as about 4.58 K and 5.34 K at 1873 K and 1823 K, respectively. This finding implied that lower oxygen was not favorable to prevent the solid inclusions in the calcium treatment of high carbon special steel. 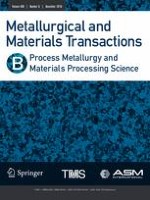 Mechanical Properties, Microstructural Evolution, and the Effect of Friction on the Plastic Flow of the AISI 321 Austenitic Stainless Steel Tube During Cold Pilgering: An Experimental and Simulation Analysis