In this study we generated zinc adipate (ZnAA) in situ [referred to herein as “ZnAA(IS)”] through the addition of its reaction precursors—adipic acid and zinc oxide—during the extrusion of impact polypropylene copolymer (IPC); we then investigated its nucleation performance as β nucleating agent using differential scanning calorimetry, polarized optical microscopy, wide-angle X-ray diffraction, and tests of mechanical properties. When compared with the pre-addition of ZnAA, the generation of ZnAA(IS) in situ resulted in higher nucleation effect toward the IPC, due to the smaller average particle size and more uniform dispersion of ZnAA(IS). In particular, compared with the neat IPC, the impact strength of the IPC prepared using 0.1 wt% of ZnAA(IS) increased by 103% at low temperature (−20 °C), whereas that of the IPC prepared with ZnAA increased by 38.9% under the same conditions. Moreover, when using Flash DSC to examine the crystallization behavior of the IPC under rapid cooling, we observed that, upon increasing the cooling rate, two crystalline peaks appeared for the neat and nucleated IPCs, presumably because of the crystallization of both the PP and PE homopolymers. 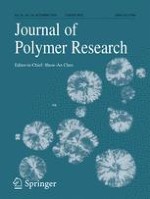