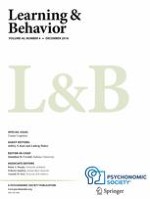 Any reward will do: Effects of a reverse-reward contingency on size preference with pet dogs (Canis lupus familiaris)

Metacognition in dogs: Do dogs know they could be wrong?