Thin films fabricated by spin coating of the gels obtained from tantalum (V) ethoxide precursor were subjected to ammonolysis at 500 °C. Cu-incorporated gels obtained from the same precursor were also spin coated and calcined at 500 °C to give thin films. The optical, structural and photocatalytic properties and their dependence on the thicknesses of these thin films were compared with undoped Ta2O5 thin films fabricated by the same precursor. All the thin films were deposited on glass substrate by spin coating with the thicknesses (d) ranging from 150 to 300 nm. The structure and optical properties of the films were investigated by X-ray diffraction, X-ray photoelectron spectroscopy, spectroscopic ellipsometry, atomic force microscopy, and UV–Vis–NIR spectroscopy. The experimental results insinuated that not only ammonolysis at 500 °C and Cu-doping drastically affect the properties of tanatala films but a variation in their thickness also has significant influence. Small intensity peaks of TaOxNy phase were also detected by X-ray diffraction in the ammonolysed thin films. XPS analysis showed that nitrogen and copper were successfully incorporated in to the Ta2O5 lattice of the respective films. Lower refractive indices and significant narrowing of band gaps (Eg) (i.e. form 3.49 to 3.27 eV for N doped and to 2.92 eV for Cu doped) were observed as compared to the undoped and oxygen-calcined Ta2O5 films. Photocatalytic efficiency of the films was demonstrated by photo-degradation of methylene blue (MB) under UV irradiation. Maximum MB degradation of 86.87% was observed for the Cu-doped Ta2O5 film, while 72.01% of MB concentration was degraded by N-doped Ta2O5 film as compared to only 59.12% MB degradation exhibited by undoped Ta2O5 thin film. 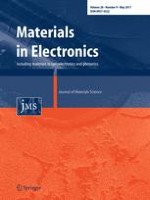