Effects of carbon and rolling temperature up to 453 K (180 °C) on rolling texture of 3 pct Si steel at a reduction of 66 pct were investigated using a single crystal with an initial orientation of {110}〈001〉. With residual-level carbon, uniform slip deformation was observed in the specimen cold rolled at room temperature and most of initial orientation {110}〈001〉 rotated to {111}〈112〉 during the rolling. With carbon addition, the formation of the deformation twins and the shear bands were promoted in the specimen cold rolled at room temperature. Regions with {110}〈001〉 were observed inside the shear bands. Warm-rolled specimen with residual-level carbon had microbands containing tiny {110}〈001〉 regions. Warm-rolled specimen with carbon addition had both the shear bands and the microbands but no deformation twin. Additionally, there were unique band structures with rotated crystal orientation around the rolling direction from initial orientation {110}〈001〉. These experimental results suggest that the carbon addition inhibits dislocation migration by the increase of the critical resolved shear stress (CRSS) and that the high deformation temperature activates multiple slip systems by the reduction of CRSS and further that the carbon addition and high deformation temperature superimposed bring about the activation of symmetrical {110} slip systems additionally. 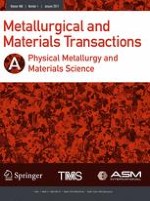 A Microscale Model for Ausferritic Transformation of Austempered Ductile Irons