Effect of the difference of expandable graphite (EG) particle size on the synergistic flame retardant effect between expandable graphite (EG) and ammonium polyphosphate (APP) in the semi-rigid polyurethane foam (SPUF) was studied for the first time. Three large-span particle sizes of EG were added into SPUF with different mass ratios of EG/APP. The synergistic effect between EG and APP on the flame retardant property of composites was investigated using the limiting oxygen index test, horizontal–vertical burning test, thermogravimetric analysis (TGA), scanning electron microscope (SEM), etc. Flammability performance tests indicated that the larger particle size the EG possessed, the more obvious will be the synergistic effect exhibited between EG and APP. SEM images and TGA results provided positive evidence for the combustion tests. Synergistic effect was strongly influenced by the compactness of united protective layer. The maximal rate of the degradation of the SPUF composite system further confirmed the relationship between the rate of the composites’ degradation and the compactness of united protective layer. Speculative reactions which were related to the changes of EG in the presence of APP under high temperature were discussed. 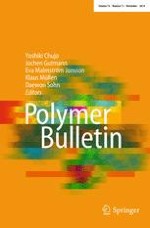 Novel and green processes for citrus peel extract: a natural solvent to source of carbon

Influence of sliding velocity on the tribological behavior of PA66GF30 and PA66 + MoS2: an analysis of morphology of sliding surface by digital image processing