Polyacrylonitrile-co-methacrylic acid (PAN-co-MAA) and cellulose nanocrystal (CNC) composite films were produced with up to 40 wt% CNC loading through the solution casting method. The rheological properties of the solution/suspensions and the structural, optical, thermal, and mechanical properties of the resulting films were investigated. The viscosity of the composite suspensions increased with higher CNC loadings and with longer aging times. PAN-co-MAA/CNC films maintained a similar level of optical transparency even with up to 40 wt% CNC loading. The glass transition temperature (Tg) increased from 92 to 118 °C, and the composites had higher thermal stability below 350 °C compared to both neat PAN-co-MAA and neat CNC. The mechanical properties also increased with higher CNC loadings, elastic modulus increased from 2.2 to 3.7 GPa, tensile strength increased from 75 to 132 MPa, and the storage modulus increased from 3.9 to 10.5 GPa. Using the Kelly and Tyson model the interfacial shear strength between the PAN-co-MAA and CNC was calculated to be 27 MPa. 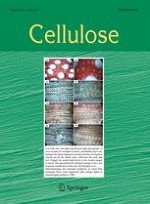