In the present work, the concept of mechanically activated annealing (MAA) has been applied to produce nanocrystalline Al0.3CoCrFeNi high-entropy alloys (HEAs) with reduced contamination levels. Phase evolution during conventional mechanical alloying (MA), MAA and subsequent consolidation by spark plasma sintering (SPS) have been studied in detail. Complete alloying is obtained after 15 h of MA, while milling time of 5 h and annealing at 1100 °C for 1 h have been used to achieve alloy formation during MAA. Both the MA–SPS and MAA–SPS routes have shown major FCC phase. The contamination of WC observed during MA was successfully eliminated during MAA, while the volume fraction of Cr7C3 reduced from 20% during MA–SPS to 10% after MAA–SPS. This method can serve as an effective way to produce nanostructured HEAs with minimum contamination. 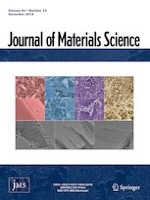 Estimation of surface tension of grain boundaries in allotropes of elements