The frictional performance of several rubbers after pulsed-DC plasma treatments has been examined. In all cases, the treated rubbers showed better performance than the corresponding untreated ones. Stronger treatments, in terms of longer process time and/or higher substrate bias voltage, led to larger reductions of coefficient of friction and wear. The addition of hydrogen to the argon plasma did not show any additional positive effect. Nevertheless, different degrees of improvement were observed for different rubbers. In fact, the energy consumed during the tribotest scales with the maximum working temperature of the rubbers, indicating that the plasma treatment is more effective in the case of more sensitive rubbers. 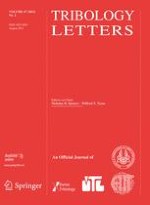 The Influence of DLC Coating on EHL Friction Coefficient