Drilling fluids are suspensions of solid particles and present thixotropic and elastoviscoplastic behaviors simultaneously, which turn their rheological characterization into a challenging task. Rotational rheometers are widely employed to determine the properties of these fluids, and one major challenge in rheometric tests carried out with thixotropic fluids is to obtain repeatable results. Submitting the fluid specimen to a known shear history by performing a pre-shear procedure is commonly used to achieve repeatable results with thixotropic fluids. In this paper, the effect of different pre-shearing conditions on the rheological measurements of an oil-based drilling fluid was investigated using cross-hatched parallel plates. Firstly, an adequate aging time to ensure complete fluid restructuring was determined by monitoring the storage modulus, G′, over an oscillatory time sweep experiment. Shear-rate controlled start-up tests were then conducted to evaluate the gel strength and the steady-state shear stress. Nine different pre-shearing conditions were evaluated, and each experiment was performed three times. Finally, the results were analyzed by using two statistical tools: a two-way analysis of variance (ANOVA) and the Tukey’s range test. The analysis shows that despite the good repeatability achieved when the same pre-shear condition is applied, the pre-shearing affects not only the gel strength but also the steady-state shear stress. The ANOVA also revealed that the effect of the pre-shearing shear rate on the fluid rheological behavior is statistically more significant than the effect of the pre-shearing time. The same analysis was performed after 10 s and 10 min of aging, and similar results were obtained. 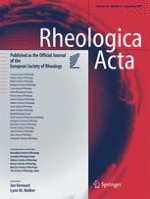 A rheological modelling and microscopic analysis of bigels