The influence of sintering conditions on the positive temperature coefficient of resistance (PTCR) characteristics and the Ni internal electrode in multilayer (Ba1.005−x Y x )TiO3 (BYT) ceramics is investigated. The BYT ceramics were fired at 1160–1240 °C for 2 h in a reducing atmosphere and then reoxidised at 500–900 °C for 1–2 h. Results indicate that the room-temperature (RT) resistance for BYT ceramics—which were reoxidised at 750 °C for 2 h after sintering at different temperatures—decreased quickly when the sintering temperature was increased from 1160 to 1240 °C. As the firing temperature increased, the sample resistance jump [Lg(R max/R min)] increased initially and then decreased. In addition, the reoxidation temperature effect on the electrical properties and the PTCR effect on the specimens were also studied. Finally, the BYT ceramics showed a significant PTCR characteristic. They obtained a resistance jump greater than 3.06 orders of magnitude and a low RT resistance of 0.25 Ω at a 750 °C reoxidated temperature for 2 h after sintering at 1180 °C for 2 h in a reducing atmosphere. In addition, the sintering temperature influence on the Ni internal electrode surface microstructure is investigated using FSEM. 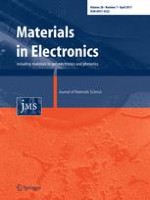