This paper investigates the influence of tunnel axis stress on strainburst. An experimental study of strainburst was conducted using a true-triaxial rockburst system. During the test process, a loading path that maintained one face free and applied loading along three axial directions on the other five faces was used to simulate the change of stresses of a representative rock element near the excavated boundary during strainburst process. Different X direction stresses were applied on rectangular prismatic granite specimens to simulate different tunnel axial stresses acting on rocks. High-speed cameras were used to monitor the rock failure process. The kinetic energy of the ejected fragments was quantitatively estimated by analyzing the recorded videos. The experimental results indicate that the tunnel axis stress has a significant influence on the strainburst characteristics. With increasing X direction stress, the strength of rock specimens increases continually and subsequently decreases gradually after reaching a peak, whereas the volume of the rockburst pits and the kinetic energy of the ejected fragments first increase continually, subsequently decrease gradually and finally increase drastically. 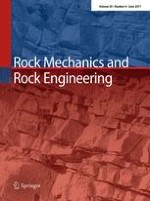 Precursors of Dynamic Excitations and Rupture in Rocks