The dissolution efficiency plays an important role on the properties of regenerated cellulose-based products. Urea is known to be one of the additives aiding to improve cellulose dissolution in the NaOH(aq) system. The acting mechanism caused by urea has been debated and one of the hypothesis is that urea could induce a conformational change on cellulose, which promotes dissolution. Here we used NMR spectroscopy on a model system for cellulose, namely, methyl \(\upbeta\)-D-glucopyranoside (\(\upbeta\)-MeO-Glcp) and compared chemical shifts and J couplings, which both are indicators for conformational changes, as a function of temperature and upon the addition of urea. We found that in NaOH(aq), the hydroxymethyl group changes its conformation in favour of the population of the gt rotamer, while the presence of urea induced temperature dependent conformational changes. Heteronuclear Overhauser effect experiments showed that urea associates with cellulose but in a non-specific manner. This suggests that urea rather than binding to the carbohydrate, changes the chemical environment inducing a change in conformation of \(\upbeta\)-MeO-Glcp and likely also for cellulose when dissolved in NaOH(aq) with urea. 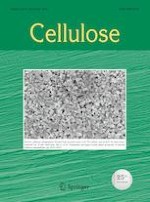