Filled joints, which are characterized by high deformability and low shear strength, are among the most critical discontinuities in rock mass and may be sheared repeatedly when subject to cyclic loading. Shear tests were carried out on tension splitting joints, with soil and granular cement mortar particles used as infillings, and the effects of the shear history on the mechanical behavior and acoustic emission (AE) of clean and filled joints were studied. The maximum strength in the subsequent shears was approximately 60% of the peak strength of the first shear for a clean joint, and the friction angle degraded from 63° to 45° after the first shear. The maximum shear strength of the filled joints was lower than 35% of the peak strength of the clean joint under the same normal stress. The change in the shear strength of filled joints with the number of shearing cycles was closely related to the transformation of the shear medium. Rolling friction occurred and the shear strength was low for the granular particle-filled joint, but the strength was elevated when the particles were crushed and sliding friction occurred. The AEs were significantly reduced during the second shear for the clean joint, and the peak AEs were mainly obtained at or near the turning point of the shear stress curve for the filled joint. The AEs were the highest for the cement particle-filled joint and lowest for the dry soil-filled joint; when subjected to repeated shears, the AEs were more complex because of the continuous changes to the shear medium. The evolution of the AEs with the shear displacement can accurately reflect the shear failure mechanism during a single shear process. 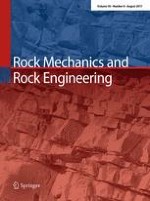 Hydraulic Fracture Propagation Through an Orthogonal Discontinuity: A Laboratory, Analytical and Numerical Study

Stress Intensity Factor Analysis and the Stability of Overhanging Rock