The thermal conductivity of ferritic spheroidal graphite iron samples containing various amounts of chunky or spheroidal graphite was investigated by means of the laser flash method. Scanning electron microscopy studies were performed to investigate the graphite morphology. Although chunky graphite is believed to grow in large interconnected eutectic cells, no beneficial effects on the thermal transport properties can be established for spheroidal graphite irons containing considerable amounts of chunky graphite. The results can be explained by the growth mode of chunky graphite with the c-axis of the hexagonal crystal as the dominating growth direction. This produces less favorable paths for the propagation of heat throughout the material as compared to lamellar and compacted graphite, owing to the low thermal conductivity of graphite along the prism planes. The crystallographic orientation of the hexagonal unit cells within lamellar, compacted, spheroidal, and chunky graphite was analyzed by means of electron backscatter diffraction (EBSD) and related to the thermal transport properties. 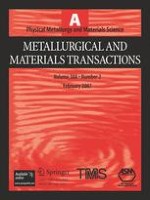 Interpretation of Nanoscale Softening in Terms of Dislocation-Accommodated Boundary Sliding