In this paper, we examine the price discovery and volatility spillovers between eight mature market economies (MMEs) and eight emerging market economies (EMEs) from January 2003 to July 2014, covering three sub-periods—prior to the 2007–09 global financial crisis (GFC), during the crisis, and post-crisis. The results of price discovery indicate that MMEs lead EMEs in the pre-crisis and post-crisis periods. All MMEs are cointegrated with China in the pre-crisis period but not in the post-crisis period. Dynamic cointegration results reconfirm our findings from Johansen’s co-integration test. The asymmetric dynamic conditional correlation (ADCC-GARCH) coefficients suggest a regional pattern among MMEs and EMEs, except in the case of European MMEs with South Africa. Employing BEKK-GARCH model, we find that volatility spillovers of MMEs with China and of Italy with EMEs weakened in the post-crisis period as compared to the pre-crisis period implying that the GFC damaged the information transmission process, particularly for China and Italy. While China is a large economy with strong trade linkages with the rest of the world, Italy is one of the larger European economies which was in relatively greater distress during the EDC. The findings have implications for policy makers and investors. 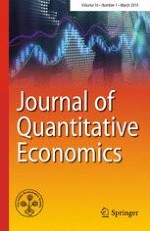 On the Dynamics of Inflation-Stock Returns in India

Macroeconomics and Markets in Developing and Emerging Economies by Ashima Goyal