In this work, a rust converter consisting of two steps of processing solutions was prepared to convert iron rust of the steel surface into a protective conversion film. The performance of the converter was evaluated in both neutral and acidic solutions by various electrochemical measurements, including potentiodynamic polarization curves and electrochemical impedance spectroscopy, and surface characterization. The effect of temperature was investigated. It was found that the rust converter is able to effectively convert the iron rust into a conversion film, serving as a barrier layer to block corrosive species from reaching the steel surface.
Anzeige 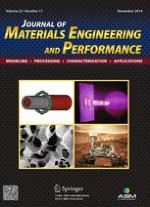 Effects of Solution Heat Treatment on Microstructure and Mechanical Properties of the Mg-4.5Zn-4.5Sn-2Al-0.6Sr Alloy