Initiation and Evolution of a Network of Deformation Bands in a Rock Analogue Material at Brittle–Ductile Transition | springerprofessional.de Skip to main content
TOOLBAR 1 2 3 4
SUCHE MENÜ 1 2 3 4

We investigate the deformation localization at brittle–ductile transition in axisymmetric compression tests of rock analogue material GRAM1 made of bonded rigid particles. This transition in rocks (as well as in GRAM1) is recognized by the formation of a network of conjugate deformation localization bands in the postmortem rock samples and by a shallow stress reduction followed by a stress plateau in stress–strain curves. GRAM1 is much weaker than hard rocks. Therefore, brittle–ductile transition occurs in GRAM1 at a low confining pressure, 0.3 MPa, which is much smaller than that for real rocks. This allows using a transparent pressure cell and applying the digital image correlation technique to visualize the deformation evolution. Taking advantage of this technique and of the detailed characterization of GRAM1’s constitutive properties in the previous studies, we show that the initiation of deformation localization bands occurs in the dilatant (positive dilatancy factor \(\beta\)) and strain-softening (negative hardening modulus \(h\)) deformation regime. During the band evolution, the deformation within it becomes compactive (\(\beta\) < 0) and is accompanied by the material hardening (\(h\) > 0), which causes the band to widen and new bands to form successively resulting in a progressively densified band network. The formation of a conjugate band network at brittle–ductile transition is thus due to the transition from dilatancy to compaction and from softening to hardening during the inelastic straining. 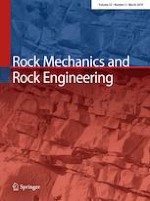