Integral Estimate from the Square of the Probability Density for a One-Dimensional Random Variable | springerprofessional.de Skip to main content
SUCHE MENÜ 1 2 3 4

The problems of the direct estimate of a functional under study are examined with the use of nuclear statistics. In selecting an optimal number of sampling intervals of the range of values of a one-dimensional random variable, it has been established that the functional of the square of the probability density is a constant, the value of which does not depend on the probability density parameters. The functional dependences of the constant being studied on the coefficient of antikurtosis of the distribution law of the random variable is determined. The established dependences for sets of log-normal probability density, the Student distribution laws, and sets of probability densities with Gaussian distribution are analyzed. From the results obtained, a generalized model between the studied constant and the coefficient of antikurtosis that does not depend on the form of the probability density is generated, and is determined by an estimate of the specified coefficient. A methodology for estimating the integral from the square of the probability density was developed. The effectiveness of the proposed methodology is confirmed by the results of computational tests. The conditions of the computational tests differ significantly from the information applied in synthesis of models of dependence between the studied constant and the coefficient of antikurtosis. Conditions for the adequacy of the methodology for estimating the integral of the square of a probability density from the coefficient of antikurtosis were established using the proposed models of the dependence of the studied constant on the conditions of computational tests.
Anzeige
Vorheriger Artikel Inadequacy of Mathematical Models of Measurement Objects and Calculations of Risk Based On the Use of Gost ISO/IEC 17025–2019
Nächster Artikel Accuracy of Lidar Measurements of the Concentration of Hydrofluoride Molecules in the Atmospheric Boundary Layer

Titel
Integral Estimate from the Square of the Probability Density for a One-Dimensional Random Variable
verfasst von
A. V. Lapko
V. A. Lapko 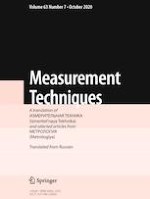 State Primary Special Standard Get 190-2019 for Acceleration in Gravimetry