An increasing number of Web services have been published on the Internet over the past decade due to the rapid development and adoption of the SOA (Services Oriented Architecture) standard. However, in the current state of the Web, recommending suitable Web services to users becomes a challenge due to the huge divergence in published content. Existing Web services recommendation approaches based on collaborative filtering are mainly aiming to QoS (Quality of Service) prediction. Recommending services based on users’ ratings on services are seldomly reported due to the difficulty of collecting such explicit feedback. In this paper, we report a data set of implicit feedback on real-world Web services, which consist of more than 280,000 user-service interaction records, 65,000 service users and 15,000 Web services or mashups. Temporal information is becoming an increasingly important factor in service recommendation since time effects may influence users’ preferences on services to a large extent. Based on the collected data set, we propose a time-aware service recommendation approach. Temporal information is sufficiently considered in our approach, where three time effects are analyzed and modeled including user bias shifting, Web service bias shifting, and user preference shifting. Experimental results show that the proposed approach outperforms seven existing collaborative filtering approaches on the prediction accuracy. 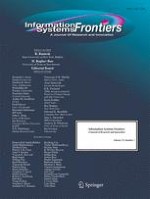 Extracting the patterns of truthfulness from political information systems in Serbia

What you think and what I think: Studying intersubjectivity in knowledge artifacts evaluation

Antecedents of ERP assimilation and its impact on ERP value: A TOE-based model and empirical test