In recent times, soil erosion interlocked with land use and land cover (LULC) changes has become one of the most important environmental issues in developing countries. Evaluation of this complex interaction between LULC change and soil erosion is indispensable in land use planning and conservation works. This paper analysed the impact of LULC change on soil erosion in the north-western highland Ethiopia over the period 1986–2016. Rib watershed, the area with dynamic LULC change and severe soil erosion problem, was selected as a case study site. Integrated approach that combined geospatial technologies with revised universal soil loss equation model was utilized to evaluate the spatio-temporal dynamics of soil loss over the study period. Pixel-based overlay of soil erosion intensity maps with LULC maps was carried out to understand the change in soil loss due to LULC change. Results showed that the annual soil loss in the study area varied from 0 to 236.5 t ha−1 year−1 (tons per hectare per year) in 1986 and 0–807 t ha−1 year−1 in 2016. The average annual soil loss for the entire watershed was estimated about 40 t ha−1 year−1 in 1986 comparing with 68 t ha−1 year−1 in 2016, a formidable increase. Soil erosion potential that was estimated to exceed the average soil loss tolerance level increased from 34.5% in 1986 to 66.8% in 2016. Expansion of agricultural land at the expense of grassland and shrubland was the most detrimental factor for severe soil erosion in the watershed. The most noticeable change in soil erosion intensity was observed from cropland with mean annual soil loss amount increased to 41.38 t ha−1 year−1 in 2016 from 26.60 in 1986. Moreover, the most successive erosion problems were detected in eastern, south-eastern and northern parts of the watershed. Therefore, the results of this study can help identify the soil erosion hot spots and conservation priority areas at local and regional levels. 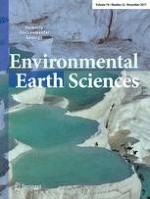 Assessment of hydrological response as a function of LULC change and climatic variability in the catchment of the Wular Lake, J&K, using geospatial technique

A quantitative approach to the influence of pyrite separation on Cu-processing tailings: a case study at Reps, Mirdita district, Albania