An infrared image-based feedback control system for intelligent fire monitor was proposed in this paper, whose aims are to realize automatic aiming of the fire site and continuous fire tracking in the process of fire extinguishing through adjusting of the yaw angle of the fire monitor. Firstly, infrared camera was used to capture images of the fire site, and under high temperatures, the fire would be easily observed. An improved adaptive image threshold segmentation scheme was developed for image background segmentation and fire acquisition. The fire region in the captured image was considered as region of interest (ROI) and the geometric center of which was calculated. Due to the special advantageous structural design of the proposed system, the geometric center of ROI representing the actual fire was considered as the direction which the fire monitor should aim at. Furthermore, a fuzzy control scheme simulating the operating mode of firefighters was proposed, and the ROI center position deviation and deviation rate were considered as inputs of the control system. Experimental results show that, after the fire was detected by the system, the fire monitor could be yawed to the direction of the fire within 2000 ms, and the deviation of image position is less than 1.6 pixels. Similarly, the proposed system could be well adapted to the changing position of the fire caused by combustion. And after no more than image iteration of three frames, the controller realizes aiming of the fire by the fire monitor, and the final deviation is less than 0.1 pixels. In general, the proposed infrared image feedback control system for fire horizontal position aiming of intelligent fire monitor has great potential for intelligent fire extinguishing by fire-fighting robots. 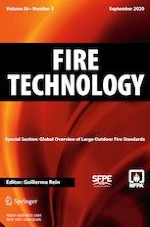