The constitutive equation as reported by Rasmussen and Huang (Rheologica Acta 53:199–208, 2014b), explaining the flow dynamics of oligomer (containing a least two Kuhn step)-diluted narrow molecular weight-distributed polymers were extended to general bi-disperse polymer melt system. It was assumed that the Rouse time of a particular polymer chain is dependent on the total number of Kuhn steps of the polymers in direct contact with the considered polymer chain. This number of Kuhn steps is proportional to the weight average molecular weight, M w , replacing the involved molecular weight in the equation as reported by Rasmussen and Huang (Rheologica Acta 53:199–208, 2014b). Two separate stretch evolution equations for the long and the short polymer respectively, were introduced to handle the two involved Rouse times. Experimentally, the bi-disperse polystyrene systems of Nielsen et al. (J Rheol 50:453–476, 2006) and polyisoprene systems as reported by Read et al. (J Rheol 56:823–873, 2012) were within quantitatively agreement with the derived model. This included both startup of extension as well as shear flow. One exception was observed. In the most diluted polyisoprene blend, the measured extensional viscosities were under predicted by the model. 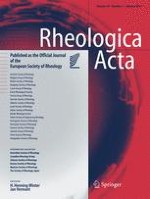