It has been next to impossible in the past months not to come across the term “Internet of Things” (IoT) one way or another. Especially the past year has seen a tremendous surge of interest in the Internet of Things. Consortia have been formed to define frameworks and standards for the IoT. Companies have started to introduce numerous IoT-based products and services. And a number of IoT-related acquisitions have been making the headlines, including, e.g., the prominent takeover of Nest by Google for $3.2 billion and the subsequent acquisitions of Dropcam by Nest and of SmartThings by Samsung. Politicians as well as practitioners increasingly acknowledge the Internet of Things as a real business opportunity, and estimates currently suggest that the IoT could grow into a market worth $7.1 trillion by 2020 (IDC 2014). …
Anzeige
Vorheriger Artikel Interview with Jay Nunamaker on “Computer-Supported Cooperative Work and Social Computing” 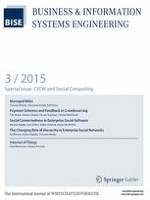 From Top to Bottom

Connect Me! Antecedents and Impact of Social Connectedness in Enterprise Social Software

How (not) to Incent Crowd Workers