When consumers are highly charged with the anticipation of indulging in a pleasurable eating experience, a service failure that threatens to deny them the opportunity to satisfy their appetitive goals produces an “interrupted anticipation.” This study demonstrated that among those whose eager anticipation was interrupted by an unexpected service failure, food aroma tended to reinforce unpleasant feelings and generally negate the positive emotional boost normally expected from a positive olfactory cue. This resulted in significantly lower levels of expected pleasure, taste enjoyment, quantity of food consumed, and repatronage intentions. In contrast, for those whose anticipation was not interrupted, the food aroma exposure significantly enhanced the positivity of the consumer's service experience. When service failures lead to interrupted anticipation, service recovery efforts may sometimes prove to be ineffective in restoring the positive feelings of customers. Implications for theory development and managerial practice are also discussed.
Anzeige
Vorheriger Artikel The impact of jump bidding in online auctions
Nächster Artikel Experience, socialization and customer retention: Lessons from the dance floor 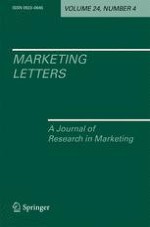 More than just a utensil: The influence of drinking straw size on perceived consumption

Price or quality? The influence of fluency on the dual role of price

Experience, socialization and customer retention: Lessons from the dance floor

The impact of jump bidding in online auctions