Economists have adopted two broad perspectives on the state: contractual (i.e., provider of public goods and services) and predatory (coercive and extractive). By a predatory state, we mean a state that promotes the private interests of dominant groups within the state (such as politicians, the army and bureaucrats) or influential private groups with strong lobbying powers. Neo-institutional economists support an extended version of the contractual perspective in which the state is not simply a ‘benevolent dictator’ but may itself be composed of predators. However, it considers predation as only a means to promote protection. By contrast, a predatory vision of the state argues that while protection and predation are two faces of the same coin, a predatory state protects only to promote its predation on the private sector. This symposium explores how a predatory approach to the state can shed light on all types of state, from liberal democratic to authoritarian and failed ones, both in the past and present. 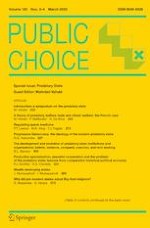 Two bandits or more? The case of Viking Age England

State predation in historical perspective: the case of Ottoman müsadere practice during 1695–1839