Layered spherical aggregates of melamine cyanurate complex (MCA) were self-assembled on the surface of α-zirconium phosphate and an inorganic–organic composite flame retardant α-zirconium phosphate@melamine cyanurate (AMC) was synthesized via a facile way. The influences of AMC on the thermal, mechanical, and flame retardancy of intumescent flame-retardant polypropylene (PP) system were studied. The results indicated that the addition of AMC could enhance the thermal stability of PP composites, and increase the final amount of char residue. The kinetics studies indicated that more activation energy of degradation was necessary when combined with AMC. Flame-retardant tests revealed that 2 wt% loading of AMC with 24 wt% intumescent flame retardant (IFR) could impart PP composites with the highest values of LOI, reached 31.2%, and passed the UL-94 V-0 rating. Without the MCA shell, the LOI of PP composites decreased to 27.1% and the V-1 rating was obtained. The existence of MCA shell reinforced the synergistic effect between α-ZrP core and IFR. The investigation of char residues indicates that AMC could not only enhance the amount, but also the graphitization of char layer, including physically strengthened effect. In the end, the mechanical properties were investigated as well. 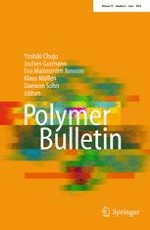 Synthesis and characterization of cellulose-acetanilide ether and its antibacterial activity