The purpose of the study is to empirically examine moral ideology, ethical beliefs, and moral intensity in the context of Pakistan. Jones (Academy of Management Review, 16(2), 366–395, 1991) model and Muncy and Vitell (Journal of Business Research, 24, 297–311, 1992) have extensively been investigated and validated in west for examining ethical decision-making process. This study examines and validates these models in a collectivist cultural settings, i.e., Pakistan. A self-administered online survey technique using convenience sampling technique was used to gather data from a sample of 1000 consumers in Pakistan. Final analysis was carried out on 338 valid responses. Data was analyzed using from descriptive analysis, correlation analysis, confirmatory factor analysis (CFA), exploratory factor analysis (EFA), and model estimation carried out AMOS. Cronbach’s α was used to test the reliability of the instrument. A majority of the consumers were high on idealism and low on relativism. Consumers dejected questionable activities that have harmful outcomes more than ones that have harmless outcomes. Both idealism and relativism are found to significant predict moral intensity. However, no relationship has been found between moral ideology and ethical beliefs. Consumer’s ethical beliefs are found to significantly affect moral intensity and behavioral intention. Social moral intensity is found to mediate the relationship of relativism and harmful ethical beliefs. The study is among the pioneer studies in Pakistan that examines the link of moral ideology, moral intensity, and ethical beliefs. The study provides an Urdu version of scales that can be utilized for further exploration and validation.
Anzeige 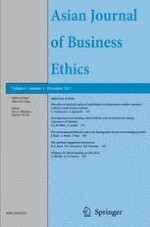