Oxide bifilms are a proposed casting inclusion reported to have been observed in vacuum investment cast polycrystalline Ni-based superalloys. Ongoing research seeks to determine if current superalloy casting practices can result in the formation of oxide bifilms, and subsequently if it is possible to observe and characterize this phenomenon. The effect of casting atmosphere, turbulence, filtering, hot isostatic pressing, and heat treatment has been investigated to identify the critical parameters that have been reported to result in bifilm formation in Ni-based superalloy IN100. Scanning Auger microscopy (SAM), scanning electron microscopy (SEM), and high-resolution transmission electron microscopy (HR-TEM) were utilized to characterize samples from each casting condition. In situ ultrahigh vacuum Auger fractography did not indicate the presence of bifilms on the fracture behavior of IN100 in any processing condition. SAM analysis identified a sulfur-enriched monolayer on the surface of dendritic casting porosity, and identified heterogeneous Ti oxycarbide inclusions in air cast IN100. SEM analysis also indicated the presence of Ti oxycarbide inclusions in air cast IN100, and determined that these inclusion structures consist of fine blocky external M(Ti, Mo)C carbide enveloping an internal core of alumina. HR-TEM analysis indicated that none of the oxycarbide inclusion interfaces exist as discontinuous unbound interfaces, and that the internal alumina core is an ultra-fine polycrystalline structure. 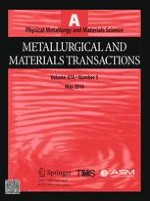 Role of the Surface in Solid–Solid Phase Transitions: Molecular Dynamics Study of the α-γ Transition in Fe

Bauschinger Effect in an Austenitic Steel: Neutron Diffraction and a Multiscale Approach