For this study, titanium dioxide (TiO2) thin films were deposited on glass substrates at room temperature by the RF magnetron sputtering technique. The preparation parameters that offer better control and reproducibility of film fabrication were first optimized. Then, the effects of post-deposition annealing temperature at 350, 450, and 550°C on the microstructure, surface morphology, and optical properties of the prepared films were investigated using X-ray diffraction (XRD), Raman spectroscopy (RS), scanning electron microscopy (SEM), atomic force microscopy (AFM), and UV–Visible (UV–Vis) spectrophotometry. Interestingly, XRD analysis shows that as-deposited and annealed TiO2 film possess anatase crystal structure only with a preferential orientation along the (101) plane. The intensity of the (101) diffraction peak and crystallite size are found to increase with increasing annealing temperature, which indicates an improvement in the crystallinity of the films. Raman spectra confirm that all samples possess anatase phase and the crystallinity is enhanced with increasing thermal annealing. From the analysis of SEM and AFM images, it is revealed that the heat treatment significantly affects the morphology, grain size, and surface roughness of the TiO2 films. The UV–Vis spectroscopy analysis shows that as-deposited TiO2 thin film is highly transparent in the visible region with an average transmittance about 84%, whereas the transmission decreases slightly with an increase in annealing temperature. Moreover, the optical band gap energy shows a red shift with increasing the annealing temperature. 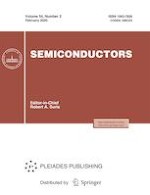 Profiling Mobility Components near the Heterointerfaces of Thin Silicon Films