In this work, a polycrystalline C12A7 electride target was prepared by one-step sintering method using a graphite crucible. X-rays diffraction confirmed the presence of the C12A7 phase. In the meanwhile, a carbon phase was founded in the target and this situation was never reported before. It can be considered that there is a little carbon left in the C12A7 crystal. The electrical and emission properties of carbon doped C12A7 electride were explored. In terms of the electrical characteristics, the electrical resistance measured by a four-pin resistance meter at 300 K is relatively large, which is similar to semiconductors, indicating a low-level electron concentration of about 1.0 × 1018 cm−3. For the emission performance, a Scanning Kelvin Probe was used to measure the surface distribution of work function. The result shows that the surface work function is relatively stable with a floating about ± 0.03 eV of the average value 3.7 eV. The work function is also smaller, although it is higher than other pure C12A7 electrides, making it has a great prospect in optoelectronics devices. 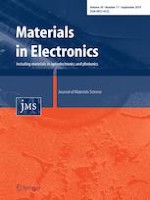