Parental spending on children is often presumed to be one of the main ways that parents invest in children and a main reason why children from wealthier households are advantaged. Yet, although research has tracked changes in the other main form of parental investment—namely, time—there is little research on spending. We use data from the Consumer Expenditure Survey to examine how spending changed from the early 1970s to the late 2000s, focusing particularly on inequality in parental investment in children. Parental spending increased, as did inequality of investment. We also investigate shifts in the composition of spending and linkages to children’s characteristics. Investment in male and female children changed substantially: households with only female children spent significantly less than parents in households with only male children in the early 1970s; but by the 1990s, spending had equalized; and by the late 2000s, girls appeared to enjoy an advantage. Finally, the shape of parental investment over the course of children’s lives changed. Prior to the 1990s, parents spent most on children in their teen years. After the 1990s, however, spending was greatest when children were under the age of 6 and in their mid-20s. 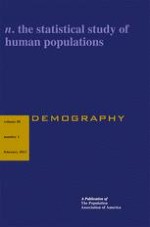 Family Planning and Women’s and Children’s Health: Long-Term Consequences of an Outreach Program in Matlab, Bangladesh