The Spanish Civil War has attracted historical interest because of its role as a precursor to World War II. The Irish role in that conflict is a revealing commentary on political developments in Ireland in the 1930s. General Eoin O’Duffy, a hero of the Irish War of Independence, attempted to use Irish involvement in the Spanish conflict as a way of enhancing his reputation. He took 700 Blueshirts to Spain to fight on the side of the General Francisco Franco’s Nationalist forces where their performance was a disastrous failure. O’Duffy’s career and the memories of the Blue Shirts involvement in Spain left his reputation in tatters.
Anzeige

Vorheriger Artikel Election Logistics and Political Meddling: Rethinking the Use of ‘Town Service’ Buses in Transporting Election Materials in Nigeria
Nächster Artikel ‘Oh Ireland! What a Disappointment You Have Been to the Basque People’: Irish Non-Intervention in the Spanish Civil War 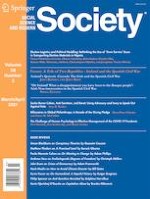 Branko Milanovic, Capitalism Alone: The Future of the System that Rules the World

‘Oh Ireland! What a Disappointment You Have Been to the Basque People’: Irish Non-Intervention in the Spanish Civil War