According to a long-standing school of thought, the improvement in equal opportunity is said to reduce the support for equality of outcomes. Yet, some scholars challenge this wisdom and maintain that equalizing opportunities introduces higher uncertainty about individuals’ future rank in their society, which, in turn, leads to more demand for equalizing incomes. Based on the 2013 survey of French residents (N = 4000), this paper argues that both claims are correct. Two pieces of evidence are provided. First, the relationship between perceived equality of opportunity and preference for equality of outcomes is asymmetrically U-shaped. Second, using split samples, this relationship proves to be decreasing among the poorest and increasing among the richest. The article provides some clues supporting the generalizability of such results, based on the analysis of the four waves of the International Social Survey Program in 27 countries. 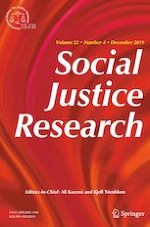 Space Deprivation and Residence Justice—Review of Evicted: Poverty and Profit in the American City