Building on the growing body of research on campaign learning, this paper considers the way that learning about policy issues depends on the nature of the issue and its relevance for the individual citizen. Specifically, the analysis finds that seniors learned much more than non-seniors about candidate positions on an emerging Social Security issue that was heavily emphasized in the 2000 campaign, but not when the same issue was more familiar and largely ignored by the candidates and press in the 2004 campaign. Yet, even without additional learning or campaign emphasis, seniors still knew more than non-seniors in the later contest. These results suggest that once party positions become familiar to them, issue publics will hold their information advantage across future elections without dependence on further campaign emphasis. 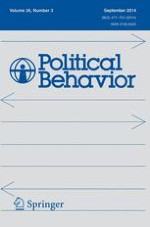 Zeroing in on the Right: Education and the Partisan Expression of Authoritarianism in the United States

Fear and Anger in Great Britain: Blame Assignment and Emotional Reactions to the Financial Crisis

GOTJ: Get Out the Juror

To Know You is Not Necessarily to Love You: The Partisan Mediators of Intergroup Contact

Blame, Responsibility, and the Tea Party in the 2010 Midterm Elections