“It is better to be loved than feared: Machiavellianism and the dark side of internal networking” | springerprofessional.de Skip to main content
TOOLBAR 1 2 3 4
SUCHE MENÜ 1 2 3 4

There is a wealth of evidence—from both practice and academic research—demonstrating the efficacy of internal networking for sales performance. However, scant research has examined whether particular individual difference variables may attenuate this relationship. In response, the current research explores an important boundary condition of internal networking; specifically, we examine trait Machiavellianism and its attenuating effect on the positive relationship between internal networking and sales performance. Using survey response data from 147 B2B salespeople employed at a large, warehousing equipment manufacturer, we find that internal networking has a positive effect on objective sales performance, but that this relationship is attenuated when salespeople are high in Machiavellianism, which is marked by flattery, deceit, and manipulative interpersonal behaviors. Additionally, we find that a salesperson’s political skill—specifically their social astuteness and interpersonal influence ability—fuel their desire to engage in internal networking. We conclude our study by providing implications for both theory and practice, and offering suggested avenues for future research.

Titel
“It is better to be loved than feared: Machiavellianism and the dark side of internal networking”
Autoren:
Riley Dugan
Maria Rouziou
Bryan Hochstein 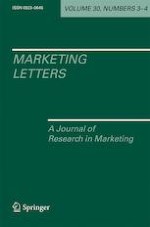 Influence of the “benefit of the doubt” in online auctions

When more likes is not better: the consequences of high and low likes-to-followers ratios for perceived account credibility and social media marketing effectiveness

Value instantiation: how to overcome the value conflict in promoting luxury brands with CSR initiatives